Pope Francis made an impassioned plea to all christians last week.  He called for us to show mercy to our common home, to cherish the world in which we live, and to have compassion for the poor.

In my context, the pontiff is appealing for us to be sustainable (mercy), mitigate the causes of climate change (cherish) and for social justice (compassionate).

n his message for the World Day of Prayer for the Care of Creation (on 1st September each year) the Pope declared as sins, actions that “… destroy the biological diversity of God’s creation”, “… degrade the integrity of the earth by causing changes in its climate, by stripping the earth of its natural forests or destroying its wetlands” and “… contaminate the earth’s waters, its land, its air, and its life…”

The strength of leadership shown in this blunt words is to be commended.

What can we do individually to follow this lead and change our course from  a system that “has imposed the mentality of profit at any price, with no concern for social exclusion or the destruction of nature”, to a system that is more respectful of creation?

An course changes within a modern lifestyle will be around reducing waste, planting trees, separating rubbish and minimising energy use.

We can also do something else the pontiff called for – to press our governments to act on the commitments made in Paris in December of 2015 and to advocate for even more ambitious climate mitigation goals.

The Anglican Diocese of Auckland’s Cherished Earth initiative is exactly aligned with promoting these changes.  The parish level actions around energy, food, waste and water sustainability can each be easily implemented in our own home.

Pope Francis has gone a step further by advocating for care for creation to be added to the seven spiritual works of mercy outlined in the Gospel.  This would be a significant and controversial change but one that fronts up to the seriousness of the crisis we now face.

To learn more about the Anglican Diocese of Auckland’s sustainability work, contact John Allen through the contact form below.

That day was last Monday. It was the day when the world’s population consumed the resources the earth would require a full year to regenerate. To sustain an average lifestyle, now requires the resources of more than one and a half earths.

For this year we overshot the earth’s capacity for sustainable supply by over four months.

Next year, the world’s ecological ‘Overshoot’ will be longer.

And longer still the following year and so on, year after year until the earth has insufficient credit in the resource bank for us to make our withdrawals from.

The resources in the bank include the soil to grow nutritious and safe food. And the water that sustains life on earth. And places to dump the rubbish we generate. And the energy we need to travel, feed, educate and enlighten us. And the biodiversity that inter-dependent species require to survive. And so much more. 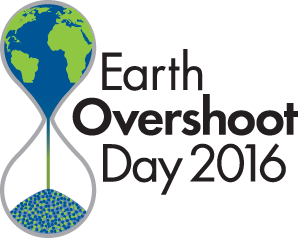 Overshoot Day is an interesting way to assess sustainability. It is a concept introduced by the Global Footprint Network, an international not-for-profit organization with offices in California and Geneva.

The Network also developed the Ecological Footprint concept and from that the National Footprint Accounts.

New Zealand has a national footprint of 5.6 global hectares per person, well within the country’s carrying capacity of 10.1 global hectares. A global hectare is the statistician’s way of enabling comparisons between countries.

Our society has an ecological footprint more than twice as large as the world average. If the world lived as we do, then overshoot day would have happened on April 19th and we would need 3.3 earth’s to provide for our daily needs.

How does this compare against other countries?

Australia has an ecological footprint half as large again as ours. If everyone lived as Australians do, then overshoot day would have happened on the 7th March and 5.4 earths would be needed to sustain us all.

Fiji’s ecological footprint is less than half ours which places overshoot day on July 30th.

This level of resource consumption is clearly not sustainable. As has been said before, we have only one earth. Not 3.3 of them.

If sustainability refers to the ability of a system to maintain production for ever, then last Monday was the day when the system we call the earth, exceeded it’s ability to regenerate resources.

The consequence is that the earth’s capacity to sustain us in the future, is reduced.

So it is that we now need to make the choice that our politicians have failed to take a lead on.  Either to continue with our consumption-led growth economy and each year, withdraw ever more from next year’s resource bank.

Or to reduce our consumption of things wanted but not needed and live within the earth’s means to supply.

View All Our Interesting Links

We'd love to hear from you. You can reach us at cherishedearth@auckanglican.org.nz